I'm not sure that Clay Anker was prepared for someone like Sean Costin! "I think he's going to be a lot to handle!" Clay said with a little smirk as we headed to the house. "Why do you say that?" "I don't know...I've seen a few of his films and he seems to be pretty dominant and he looks like he fucks pretty hard!" I laughed and smiled only because I knew he hit the nail on the head. "You'll be fine, Sean knows what he's doing and most models have told me it feels great to get fucked by Sean." Clay was a little intimidated by the size of Sean but then again most people are. Once the two met they hit if off right away. Mainly because they are such different people and live in complete opposite worlds. Clay's one request during the film was to have his ass eaten out and dildo'd first. He's never had it done before and wondered what a warm tongue would feel like rubbing across his asshole. From the look on his face, I think it's his new favorite thing before getting fucked. Add him to the list of satisfied models fucked by Sean! 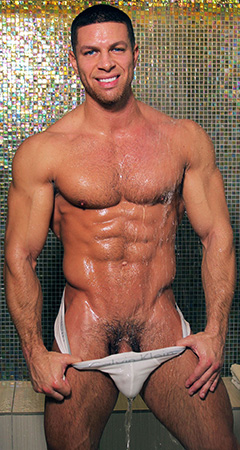 what's up with this scene? It is only showing a preview and not the full scene

Sean Costin = sex on legs. He is the reason I subscribe to this site.

That felt so genuine.. I almost believed it.. This was most likely one of the best videos released on this site. Quite frankly, Clay is a star, that I hope you guys do whatever it takes to keep. And don't you DARE let him cut that gorgeous hair. haha Love it! he's awesome! And love the paleness, like a porcelain doll :D

Great scene! Very well done and they seemed to have real chemistry. Loved it!

That was one hot as hell makeout session! 5 stars

Sean took total ownership of Clay- Sean was in absolute control and in charge at all times throughout the scene and Clay was only too willing to let him do it. That's what made this scene so great- an extremely manly muscle guy like Sean asserting his absolute masculinity. I want to see more scenes with Sean like this- it is a role so natural for him to be in.

That's what I'm talking about. This is a well-made gayporn scene! Great chemistry between the guys, good kissing, fondling,rimming & BJs, and some major & enthusiastic fucking! Good photography & editing. Thank you, everyone involved.

It has Clay in it, that's an automatic WIN in my book! :D

Absolutely LOVE seeing Sean and his ripped body in action, especially that BIG muscle ass and those abs when he is drilling a tight hole. He's one of the top reasons for my membership here. Would love to see him get revenge on Derek for that ass plowing he gave him a little while ago!