Leo Bosh had to get something off his chest. He's been crushing on Michael Evans for the longest now, and wanted to put that on the table. Michael admits he'd caught Leo fucking Sean and thought he'd do a much better job then Sean Costin. Both guys had their own agendas but lucky for us, they both were down to fuck. Bottom boy Leo sucked Michael off until he was rock hard and ready to get railed from behind. Michael fucked Leo doggy style slapping his ass and pulling his hair taunting him with who's the better fuck. The chemistry was so strong knowing Leo was finally getting all of his crush Michael, and Michael proving he was a better fuck then Sean. Leo rode Michael like a pony until Michael's power stick came seconds from cumming... and that's when it happened. 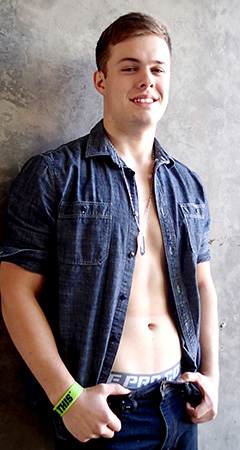 I could watch Michael Evans eat a box of Corn Flakes.. He is so adorable. His ass could not be anymore perfect than it is.

I actually liked this pairing. I thought they both did a great job. It had plenty of kissing, fucking and good ol' ass smacking. That being said, I too hope there is a Michael/Sean pairing just around the corner!

Mike and Leo did a great job but I agree that I liked the end part the best where Sean and Mike, two hot masculine guys, talk trash to each other. Sean is fantastic when he assumes his naturally dominant big muscle guy role.

NIce scene. Mike is a hottie and I loved the trash-talking. Please tell me that the interaction at the end between Mike and Sean Costin is a teaser of a full scene between those two!!!

Not bad. Mike obviously enjoys being the dominator and he gives Leo a good fuck, but I'd prefer seeing a pairing of equals, someone who is more simpatico, perhaps a Jason Keys paired with Leo. He was merely being used as a love doll here.