Brett Cady Jerks Off OUTSIDE

Brett Cady truly is a rare man these days. He's vegan, has a huge heart, would take & give the shirt off his back to one in need. Thankfully, under his shirt, he has a killer bod... I personally love his ass. He hasn't had much sexual action in his life but always thought about it. It was actually his idea to jerk off on top of the mountain near traffic. I believe this was an experience that was perfect for him and finally allowed him to explore a little bit. Hope you all like this stud. If you plan on taking him on a date, know he's believes in romance and you won't get away with anything less. Bring your "longest ride" skills out... yes I teared up at the movie. 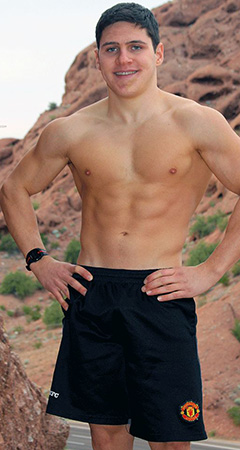 This whole "Gift Card members are Stream-Only" is total BS. some of us actually pay more to go the Gift Card route for anonymity. Downloading to enjoy later shouldn't be restricted to monthly subscribers who actually pay less... Complete BS!

The opening JO on the mountain was exhilarating, involving and well-photographed & the following interview was amusing. Should have ended right there. The self-shot segments always boring & he more or less repeated the same stuff he already said on the mountain. The jackoff was annoying with that piece of paper stuck to his balls for the whole thing.